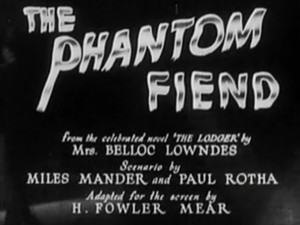 This is the first talky remake of a book and later Alfred Hitchcock movie called “The Lodger”, inspired by Jack the Ripper. It seems people prefer Hitchcock’s silent version, this remake was made while talking in movies was still in a refining phase, and the characters change a bit in odd ways because of that.