When a well-known actress gets into a car accident, a reporter comes to interview her. The dying actress tells the reporter that the death of her fiance a few years back was actually a murder. This bit of knowledge thrusts the reporter into a web of deceit and puts her life in jeopardy because now she knows too much. 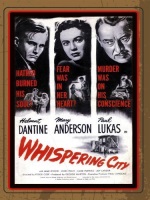