Ollie has fallen in love with Georgette, an innkeeper’s daughter. This is nice, except she is already married to a very dashing Foreign Legion officer. To forget his lost love troubles, he joins the Foreign Legion as well, dragging Stanley with him. In their idiotic bumbling, they get charged with desertion and are charged to be killed from firing squad. They escape only to find that wasn’t the end of their troubles.

A good ol’ Laurel and Hardy flick right here, and not one their worst either. Definitely check it out. 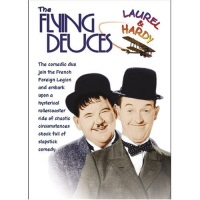 Directed By: A. Edward Sutherland